How To Avoid The Friend’s Zone…

Question From A Reader:

I have a question about a scenario. Maybe you have covered this elsewhere, but recently an ex-roommate of mine who is also a friend is acting differently after her and her boyfriend split once he got another gal pregnant and went with her. It has been some time since.

She always has liked seeing me which I thought was just friend, but it is questionable whether men and women can be just friends.

She’s single now, I’m single, and she has planned to come ALL the way down from Oregon to where I now am in Texas. She has been saying things multiple times under the presumable context of friendship frequently such as:

She uses the word friend, but why would a gal come all the way here to “get a break” with me specifically. What’s up with this love word too for a friend.

She calls me friend and then acts like this. I can’t tell if she likes me though as a friend because she says “friend” a lot, but then more seems to be going on. I am not listening to what she says, but what she is doing as you have taught me.

Any advice here or an experienced read on the situation. I honestly don’t care if it is friends or not. I just got out of the big M a year or 2 ago (not counting) and am in no rush for love at all. What’s up with this woman man?

Thank you for your time and answer friend.

When a woman flies that kind of distance, but tells you that line of “WTF???”

It’s simple and you hit it on the head… ignore what she says. Pay attention to her ACTIONS.

She’s putting the “friend” thing out there as protection for herself. That gives her the maximum options for when she comes out there to see you.

She knows she’ll probably stay with you, right?

Right now, this is how she’s thinking about it: “Hmm… it’s been a while. Mikhiel was cool. I could hook up with him. But I don’t want him thinking I’m a slut. Or that he’s got me easy. So I’ll test him by putting that ‘we’re just friends’ thing out there and see how he handles it. If he tries to talk me into sleeping with him, or I’m just not feeling it, I can pull the ‘just friends’ card on him and kill it right there. But if he’s cool, and triggers attraction in me, I could go with it.”

You see how that works…?

2) Tease. Dial up the attraction the way you learned in “Bad Boy Formula“ 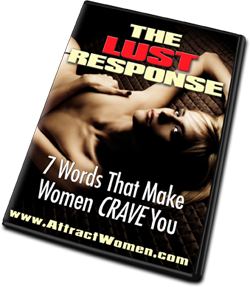